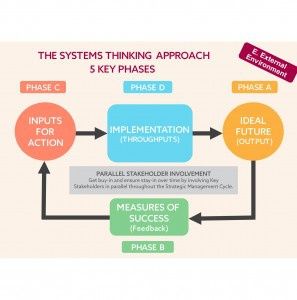 A non-profit decides that their staff is overloaded with member questions and it needs a website to communicate with its members and the community at large.

They hire a company to develop the website. The website is expensive and complicated. Causing members to have difficulty finding information and so they call the staff to get their questions answered after all. The website developers add additional functions to the website so that the members could create reports, donors could learn how their donations are being used, and the public could learn about the charity & how they could join. However, members and donors don’t find the new functions as quick as calling staff, so the new functions go relatively unused.

So members, donors and the public call the staff to get information.

At the Haines Centre we use “Systems Thinking” to understand systems of all kinds, especially living systems like organizations, departments, teams and families.

Systems are made up of a group of inter-related components that work together in support of the objectives of the whole.  If there is no relationship between the components, there is no system.

The Laws of Natural Systems:

If the non-profit would have taken a look at three of the twelve laws of natural systems before the website was designed they could have saved time, money and headaches.

Wholism – The non-profit needed to be clear on why they wanted a website. Was it to give up-to-date information to members, attract donors or advertise to the external community on what the non-profit did? Without this clarity, the development company tried to do everything and a complicated and expensive system was born.

Open System – The non-profit is impacted by external forces like regulations, the economy and what other non-profits are doing. They, therefore, had to respond to these factors and communicate with members. They should have requested a website that was easy for the staff to update.

Multiple Outcomes – The staff and members had different desires for the system. The website did not seem to deliver on less inquires or updated information. By getting clarity on what are the important outcomes that each group wanted, the website might have been able to deliver.

If they discussed these three systems thinking laws in relation to the website, the system could have been designed to give the members the updated information they required and cut down the amount of time that staff spent answering queries.

Do you have a system that is not performing up to your expectations? It could be a computer system, a team, or an entire organization. Discussing the laws of systems thinking can help you design a new system or update an existing one so that you reduce issues, increase productivity, and save money.

I’d love to talk with you about systems thinking. Valerie.MacLeod@HainesCentre.com